Early in the morning on Tuesday January 23rd the Suffield Board of Trustees met before an unusually large crowd of fourteen concerned citizens.  Among the crowd were six firefighters.  The meeting started off with Road Superintendent Scott McBroom reporting on what his department had been doing for the past month.  Predictably, he told of their efforts to keep the roads clear of snow and ice. He also reported that they have used a "little more than half their quota of salt" for this year.

Fire Chief Robert Rasnick reported that they had responded to 62 calls for service in December and had ended 2017 with a total of 746 calls, up from 743 call in 2016. He also reported that the department's 2012 ambulance was now back and in service after some body work to remove rust and be repainted.  Rasnick said that the warranty work was done by Horton Manufacturing and that they did the repair and painting at no cost to the township.  The cost of renting an ambulance to use while this work was done will be paid out of fees collected from insurance companies for hospital runs, thus no real out-of-pocket expenses to the township.  He also asked the trustees to accept the resignations of two of his valued firefighters, Randy Porter and Chris Dinkins.

The Chief asked the trustees for $7,000 to purchase five new ballistic vests for EMS responders to wear when they respond to calls where violence is likely.  Rasnick turned to EMS Coordinator Tim Hinkle to explain the need for vests and further explanations to the trustees.  After some discussion Tom Calcei motioned that the trustees expend $7,000 to buy the vests from Southeastern Emergency Equipment.  Jared Phillip seconded the motion and all three trustees voted to spend the money.

A short discussion was again had on the Carriage House Lane situation.  This is moving ahead as planned.  Zoning Inspector Adam Bey said that he hoped a "walk through" of the house at 1560 Carriage House Lane could be done sometime next week, but admitted it was hard to coordinate schedules of the four departments involved, plus the new property owner.  In zoning matters, the trustees appointed Adam Bey as the primary representative for Suffield Township to the Portage County Regional Planning Commission and Dave Vartenuk as the alternate representative.

Some discussion was had on the use of our now closed cemeteries.  While no grave sites are available, the trustees are going to have to determine a policy on allowing the burial of cremation urns in plots where a casket is already interred.  They agreed that a new policy on cemetery use is needed and plan to work on that in the very near future. 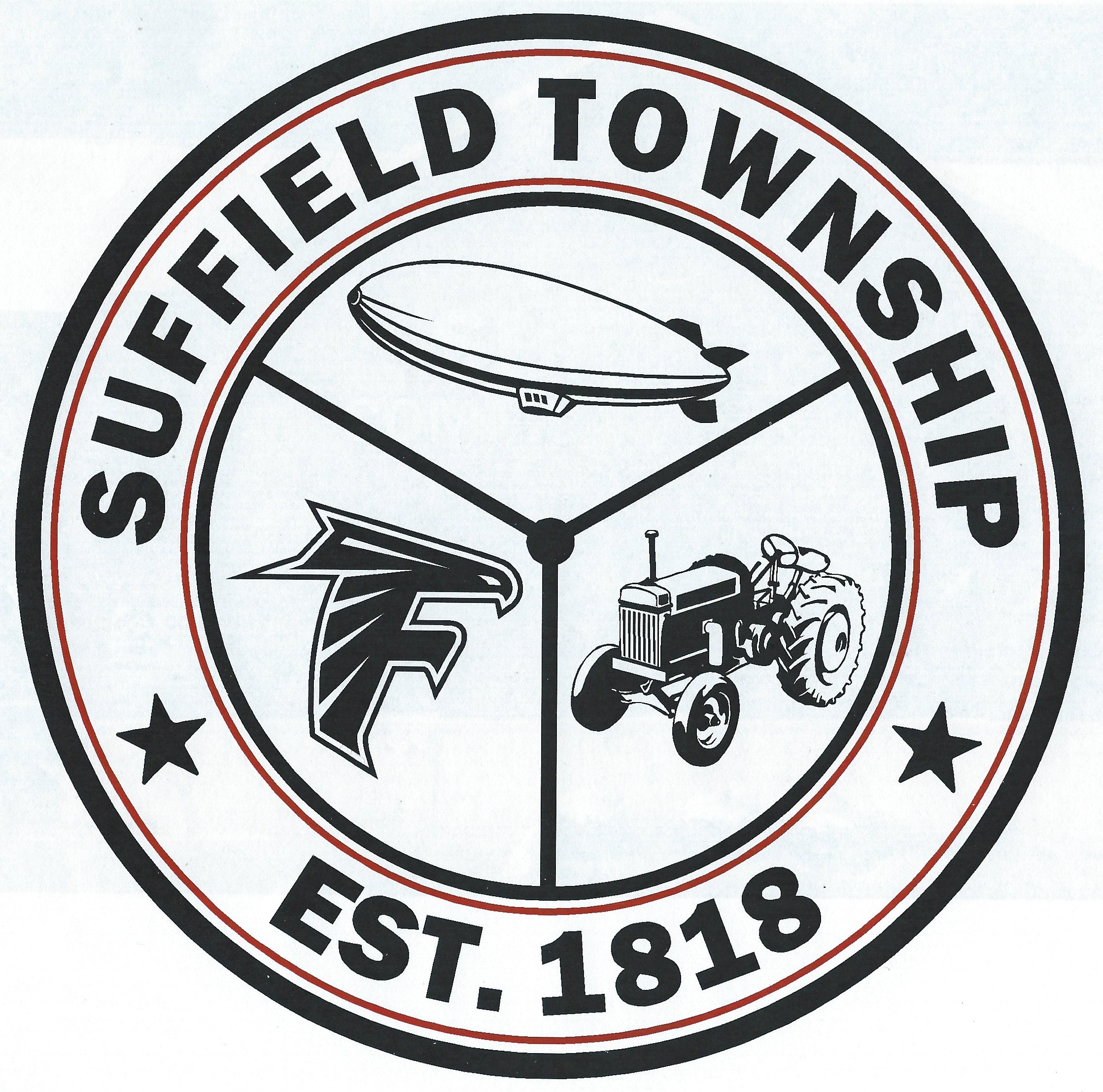 Also on the table for discussion was the proposed new signage for the Suffield Community Center.  Trustee Jared Phillip has been working with sign maker Graphic Detail, Inc of Brimfield to design signs and graphics for the building and the driveway entrances from both Waterloo Road and State Route 43.  Of particular interest to the assembled crowd was a circular sign that some feel is destined to become the "seal" for Suffield.  To the left is this "seal", which incorporates the idea of community, giving attention to the Field Schools, the local farming industry and Suffield's blimp heritage. As stated, this is just a proposal that will be further discussed in the near future.

The trustees next meet on Tuesday February 13th at 8:00 PM in the Suffield Community Center.  The Zoning Commission continues its work on the new Land Use Plan on Wednesday February 14th at 7:00 PM.  There are no Board of Zoning Appeals hearing scheduled.