At the Tuesday May 24th Trustee's meeting, two new firefighters were added to the Fire Department's roster at the request of Fire Chief Robert Rasnick.  Randy Porter, who served with the Suffield Fire Department in 2010 and 2011 was rehired.  He is currently a full time fireman for the City of Green Fire Department.  Also hired was William Apitz, who began his interest in firefighting by 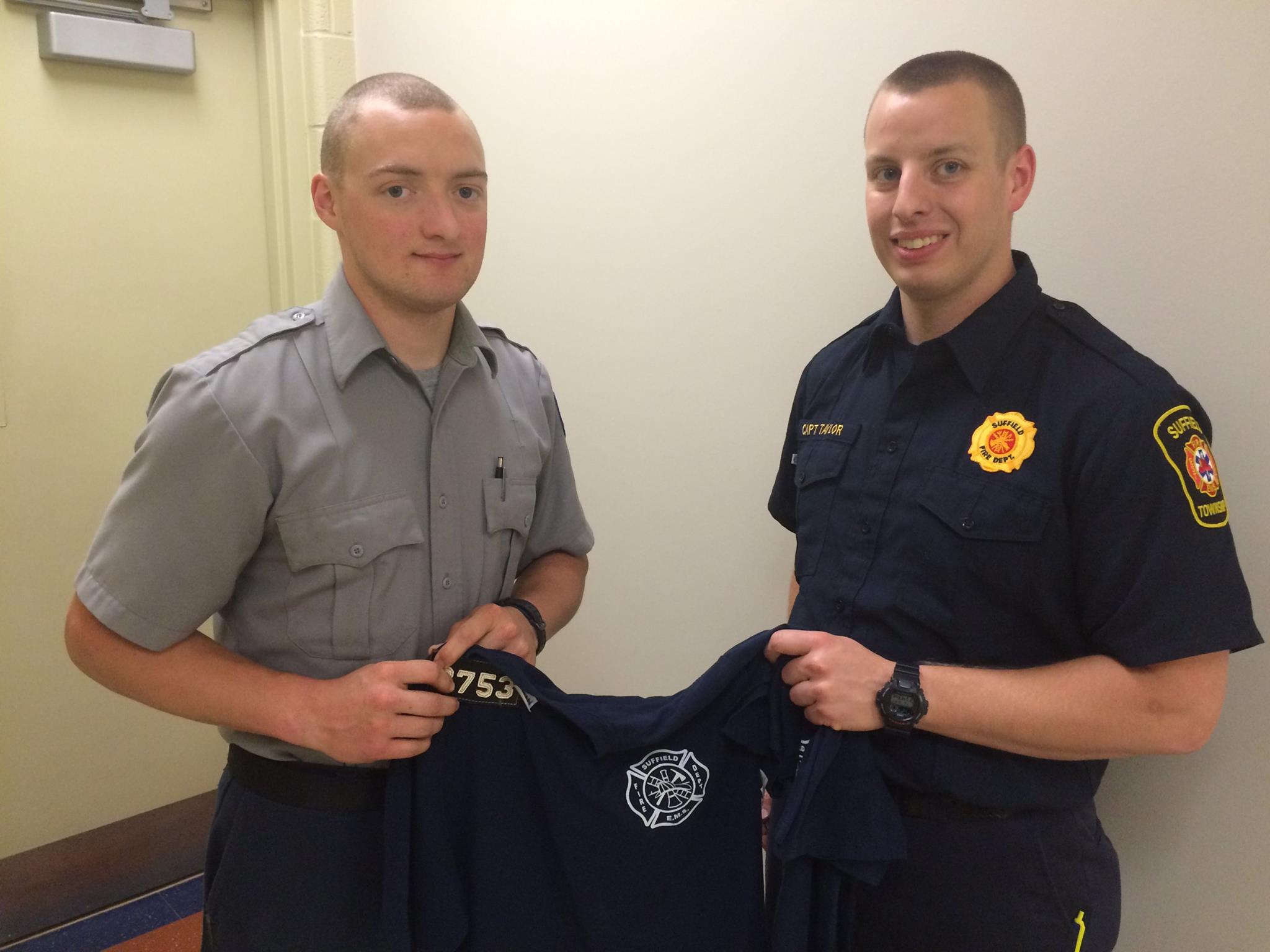 joining Suffield Fire Department's Explorer program.  He is the third member of the department to come from those prestigious ranks.  Kyle Knapp and Michael Morrison are the other two.  Apitz already completed his firefighter level two class and his basis EMT class, so he is ready for duty.  Pictured are William Apitz on the left and Captain James Taylor.

During the discussion of Fire Department matters it was noted that Chief Rasnick has applied for a federal grant to hire some additional personnel.  This particular grant would allow the department to hire two new firefighters and would pay their salary and fringe benefits for two years.  This was noteworthy for several reasons, most notably the rise in the number of multiple call-outs, and the disproportionate number of mutual aid runs that Suffield and Mogadore share.  Multiple call-outs are when one crew of firemen are called out and a second call comes in before the first crew has completed its call.  Chief Rasnick noted that so far this year, Suffield has been called out to assist or handle calls in Mogadore on three occasions, while Mogadore has sent fire crews to Suffield 13 times.  While mutual aid is a good thing, it also lessens the home community's ability to respond to their own calls in a timely manner.  Ultimately, Chairman Tom Calcei suggested that the township should continue pursuit of the aforementioned grant, and look for other means to increase staffing.

It was mentioned that the somewhat controversial waterline from Brimfield to the water station in the Rivermoor Estates allotment has apparently been put on hold by the County Commissioners.  Jeff Eldreth said that the line has been completed as far south as Sunnybrook Road and Old Forge Road.  Also discussed were several properties that need mowing.  Fiscal Officer Lori L. Calcei said that she is having a difficult time in locating addresses for some of the property owners of vacant houses.  Trustee Dave Vartenuk said that the residents of Suffield are part of NOPEC, the Northeast Ohio Public Energy Council, and that we are eligible to purchase electricity for .635 cents per kilowatt hour through them.  If your rate with another supplier is higher, it might be worth your while to check into using NOPEC as your supplier.  See www.nopecinfo.org for more information.

The Trustees voted to advertise for bids to pave Palm Road from Trares Road to Randolph Road.  Trustee Jeff Eldreth said that this portion of Palm Road has never been properly paved and that the current road base is only about an inch thick.  The sealed bids must be presented to the township by July 12th and the winning contractor must be able to complete the project within 60 days.  Actual advertisement and specs will be posted in the Record Courier.  One resident, in the crowd of twelve people, wondered about the unsightly conditions of the property behind the recycle bins on State Route 43.  Tom Calcei suggested that the township should renew its efforts to get the property owner to clean up the site.  Jeff Eldreth said he would make contact with the owner and try to get them to remove some old equipment and the partial cinder block building that still stands there. The township had considered trying to get County Landbank funds to demolish the old garage, but those funds were only available for residential properties.  In the meantime, Eldreth is going to try and get the owner to install a fence behind the dumpsters as he had apparently promised in the past.  This would help keep trash from the recycle bins from accumulating on the vacant property.

On the upcoming calendar, the Trustees will hold a 2017 Budget Meeting on Tuesday July 12th at 7:00 PM, followed by the regular Trustee Meeting at 8:00  PM.  The Suffield League's Memorial Day Parade will be held next Monday at 2:00 PM along Waterloo Road near State Route 43.  This event will be held RAIN OR SHINE.  Since the chance of rain is present in the forecasts for the next 14 days, it was suggested that bringing an umbrella to the parade might be a wise idea.  Also, Boy Scout Troop 267 will again have a Pancake Breakfast at the historic Town Hall on Memorial Day from 8:00 AM until 12:00.  The Suffield Historical Society will sell hot dogs, pop and other snacks next to the Town Hall from about noon until the end of the parade.  The Trustee next meet on Tuesday June 14th at 8:00 PM.