A group of concerned residents showed up at the Portage County Commissioners meeting room on Thursday August 18th to have their opinions heard on whether the Pretty Glen Dam should be removed or repaired.  Spearheading this group were Carol Groh and Bill Daniels, who both actually live on the shores of the Pretty Glen Pond, and John Yeargin, who lives nearby in the Spring Valley Allotment.

Pretty Glen Dam, aka the Hills Pond Dam, was originally built in 1938.  It was privately built and owned with the pond being created for the use of people that bought properties in the Spring Valley Allotment.  In 1991, the Portage County Commissioners purchased the dam, and some of the pond, in order to stop the City of Akron from annexing eastward into Portage County and Suffield 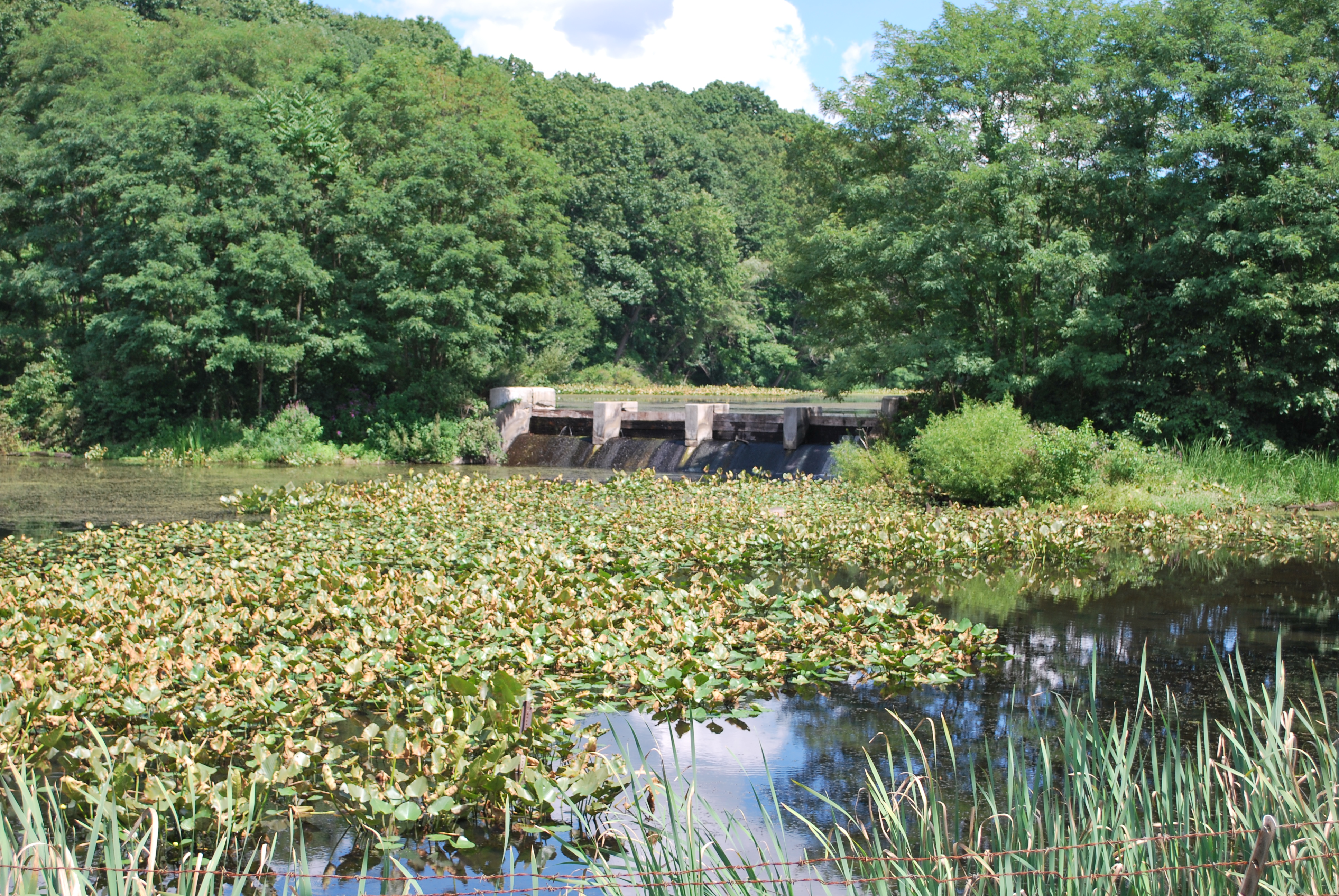 Township.  Recently, however, in 2012 the Ohio Department of Natural Resources (ODNR) inspected the dam and determined that repairs were necessary.  In 2015, it was estimated the cost of these repairs would be about $56,000.  Suffield Township officials became aware of the situation and took steps to make sure the current county commissioners were aware that the dam and pond were very important to the township.  At that time, it was pointed out that water from the pond is used by the Suffield, Mogadore, Tallmadge and Brimfield Fire Departments.  It was also pointed out that residents living along the Pretty Glen Pond would likely experience a reduction in their property values if the pond was drained.  The county commissioners decided to table any further discussion on eliminating the dam and later chose to hire an engineering firm from Columbus to review the situation.  Evans, Mechwart, Hambleton & Tilton (EMH&T) recently submitted a finding to the county commissioners.  Oddly enough, EMH&T suggested that the cost to repair the dam was now up to about $1.5 million and the cost to remove the dam about $1.6 million.  Word and concern spread when it was reported in the Ravenna Record-Courier that grants were not available for repairs, but grant money was out there for dam removal.

In the meantime, residents of the Spring Valley Allotment have begun to organize a movement to save the dam.  Carol Groh hosted a gathering at her pond-side home to allow the property owners to hear the complaints and to make a plan of action.  A letter from the county commissioner had been sent to those property owners whose property actually bordered the pond.  During this session it was pointed out that there are 82 houses in the allotment and all these homeowners have deeded rights to use the pond.  Those residents, who have no actual pond frontage themselves, do have a public access point.  Also attending this meeting was Suffield Fire Department Chief Robert Rasnick.  He was clearly concerned about the prospective of losing access to the water now available in the Pretty Glen Pond.  He stated "I think it's insane" when asked about removing the dam. He also pointed out that the Mogadore Fire Chief, who couldn't be at the meeting, was also very much in favor of keeping the dam and the source of water.

John Yeargin pointed out that a tax map that he had obtained shows that a large portion of the pond is actually owned by the Testa Companies, who recently bought the old West's Mogadore County Club for development.  He and Chief Rasnick also mentioned that the Sunoco Company was very interested in the future of the dam, as they are dependent on the pond's pool for a certain percentage of the water that they are required to have access to.

But all that was on Wednesday evening.  The real event was Thursday evening at the county commissioner's 7th floor meeting room.  Before a packed room, Shawn W. Arden of the EMH&T Engineering firm started by talking about his firm's study of the area.  He mentioned that the ODNR had last conducted an inspection of the dam in 2012 and they would again inspect it in 2017.  The last several inspections had shown flaws, the most imposing was that the dam lacked "spillway capacity".  He then talked about the three "concepts" that were currently being proposed.  Concept #1 required that the entire pool of water to both the east and west of the dam be drained away so that the dam could be covered with "rolled concrete".  This would cost the county an estimated $1,414,110.  He said that at this time there were no known grants available to help with this cost.  Concept #2 would be to drain the pool of water and raise the top of the dam so that water does not "over-top" the dam itself.  This solution would come at an estimated price of $1,542,835 and again he knew of no available grants.

Concept #3 was removal of the dam and restoration of the land where water currently lies.  In this concept, there would likely be a small pool of water created near Martin Road so that a dry hydrant could still be located there.  Under this plan, the muck that fills the bottom of the pond, estimated to be two to six feet deep, would be piled to the sides of the stream bed for drying purposes and various forms of vegetation would be planted.  The cost to remove the dam was estimated to be $1,621,300.  However there are grants available to the tune of about $972,780, meaning this proposal would actually cost the county about $648,520.  Oddly enough, Commissioner Kathleen Chandler mentioned that the City of Akron might be willing to help out on this project, provided the dam was eliminated.  No clarification was given on this statement.  Mr. Arden's presentation was straight forward and very professional.  He said he welcomed public comment and on several occasions heard things from the audience that he had not learned in his evaluation process.  Mr. Arden said that any of the concepts would take about one year to finish.

After this presentation by Mr. Arden, the floor was opened for public comment and as expected, there was plenty.  As stated above, the commissioners were told of the need for water for fire suppression, the likelihood of lowered property values, the impact that removing the dam would have on the eco-system, and, of course, the questions on why the dam needed to be taken out after 78 years of peaceful existence.  Suffield Township trustee Tom Calcei asked how removing the dam would improve the eco-sytem as Mr. Arden had stated.  Mr. Arden admitted that removal wouldn't necessarily improve the eco-system, but would merely change it.  While the residents were polite in their questions, some of the questions put the commissioners on the defense.  John Yeargin and Bill Daniels both asked if money had been allocated over the years for routine maintenance, which, if done, would have kept the dam in acceptable condition when inspected by the ODNR.  Commissioner Maureen Frederick admitted that this was not the case.  The only time that the crowd seemed to grow testy was when Maureen Frederick read a letter or e-mail from a woman who is in favor of removing the dam.  The crowd, who had to give their name each time they spoke, was upset that Frederick refused to name this woman.

Near the conclusion of the meeting, Maureen Frederick said that, when taking into consideration potential federal or state grant money, the difference in cost between repairing the dam or removing it would be one of the big factors in their final decision.  One interesting point that was raised by Mogadore Fire Chief John Cain was the time lines for applying for and getting grants.  Mr. Arden said that of the two grants he is familiar with, one has a filing deadline in September and the other in December.  When Maureen Frederick was asked when a decision on the dam would be made, she said she wasn't sure.