Old and lingering items took center stage at the Tuesday June 14th Suffield Township Trustees Meeting.  Trustee Jeff Eldreth said that the Road Department has completed its "crack sealing" program for this year and now has moved onto once again mowing along the roadways.  He asked for $3,220 to pay General Concrete Construction Company for work to be done in the next several weeks to replace some curbs and gutter and fix a catch basin on Rivermoor Drive.  Eldreth said that the "chip & seal" program is about to start and he presented a list of roads that the township hopes to "chip & seal" this summer.  A copy of this list is on the Road Department page of this website.  In addition, the township is hoping to pave Palm Road from Randolph Road to Ranfield Road.  This paving is contingent on pricing, which will be known on July 12th, when the bids for the project are opened.

Trustee Dave Vartenuk advised that the Zoning Commission meeting had been postponed from last week until Wednesday June 15th, and it will be at 8:00 PM, rather that the usual 7:00 PM start.  Vartenuk noted that there has been some progress to the clean-up of the Copeland's Landing property, including the removal of several submerged boats.  Zoning Inspector Adam Bey commented that the clean-up on the lake-side of the Copeland property is still being investigated and run by the State of Ohio.  On other property clean-ups, it was also mentioned by Bey that Jack Trickett, the owner of the old Trellborg property, is pushing for a Board of Zoning Appeals hearing in hopes of being allowed to operate an automobile dismantling business on the property.  The County Prosecutor's Office has stated that no local hearing can be held on this matter until a case pending between the Ohio Attorney General's Office and Trickett is resolved.  In what may be the world's longest standing fight to get a condemned house demolished, some progress was reported on the house at 1560 Carriage House Drive, which is now owned by a bank. 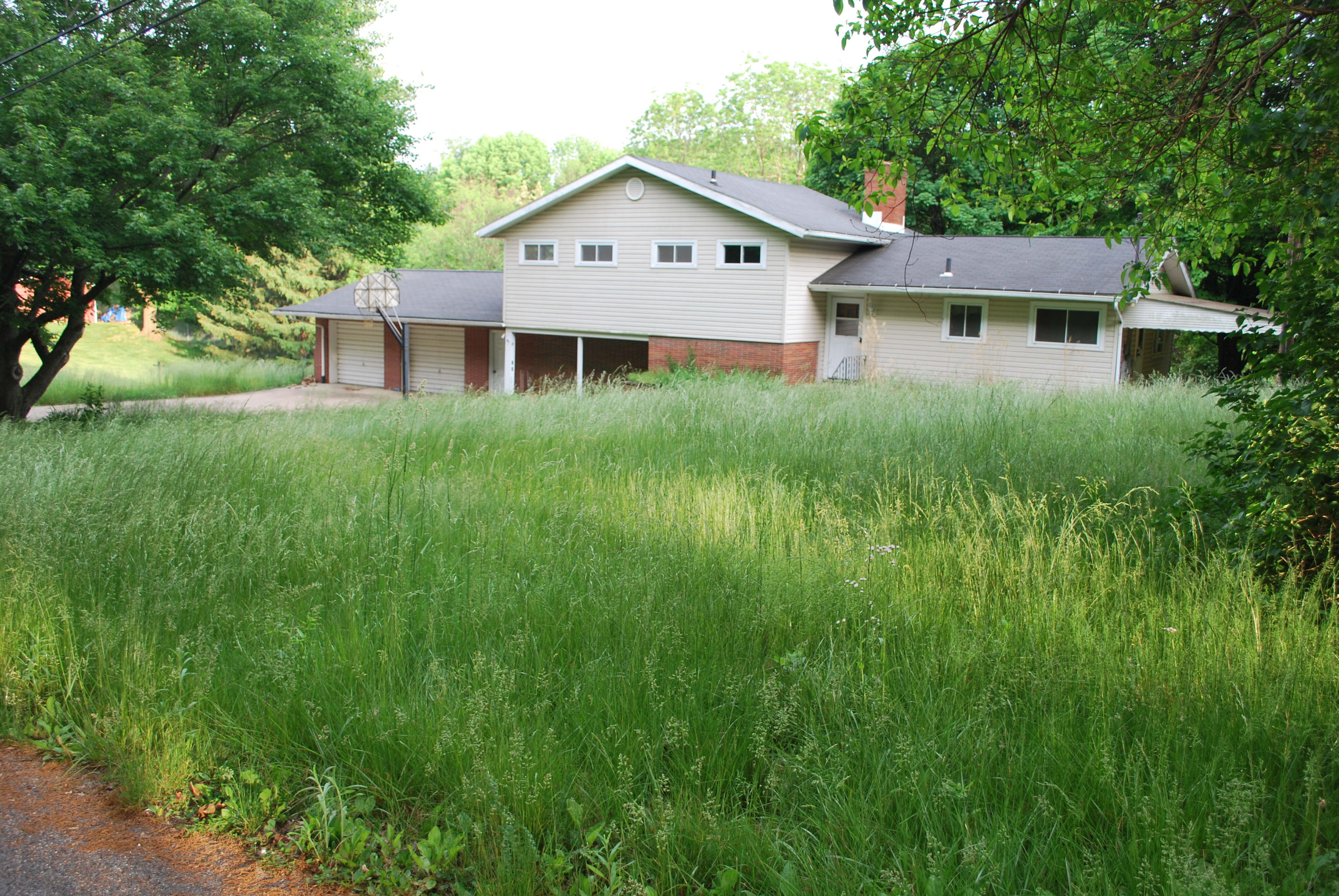 Some discussion was had on a house at 1470 North Polen Avenue (see photo on left), which has been vacant for some time and the yard has not been mowed yet this year.  One of the problems that the township has run into on this and several other properties is the ability to locate an owner.  Once an owner is located, warning letters can be sent to the owner mandating that they mow the property.  If they fail to do so, the trustees may elect to have the property mowed and ask that the County Auditor add the cost of mowing to the owners tax bill.  In the meantime, the township is forced to front the mowing costs.  Several other properties in the township have needed prompting by the township officals in order to come into compliance.

From the smaller-than-usual audience, Dave Polen asked about the status of the recycling bins.  Trustee Tom Calcei said that the Portage County Solid Waste Management would be sending out cards to all residences in order to get input from the residents on whether they would prefer to recycle as they do now, by using the dumpsters across from the Road Department, or by having curbside recycling.  Once these cards have been filled out and returned, the trustees will make an informed decision.  The Suffield Historical Society has sent a letter to the trustees outlining their plan for shrubs and flowers for the front of the historic Town Hall.  The trustees voted to accept the plan and allow the Historical Society to go forward with the project.  Project committee person Vicky Vincent acknowledged that the plantings will cost around $500 and will the project completed in the next couple weeks.  The Historical Society used the design services of the Canton Road Garden Center and will bear the cost of the project.

The trustees will meet again on Tuesday June 28th at 7:00 PM for further review of the township's Personnel Policies and Procedures Manual, and then the regular business meeting at 8:00 PM.  Of other interest to the township, the trial of Samantha Moseley in the death of township Road Department employee William Knapp has again been postponed until July.  The pre-trial is on July 14th at 10:00 AM and the Jury Trial is July 19th at 9:00 AM, both in Judge Laurie Pittman's courtroom.  Since April 1, 2015, when the township website changed to its current personnel and format, there have been 50,301 visitors.  Thanks for your interest and support!