The Suffield Township Board of Trustees met on Tuesday June 28th.  Actually, they met twice.  Once for some review and revision of the township's "Personnel Policies and Procedures Manual", and then for the regular semi-monthly meeting.  A number if issues were discussed, but it was the recycling issue that drew the most attention from the twelve residents in attendance. 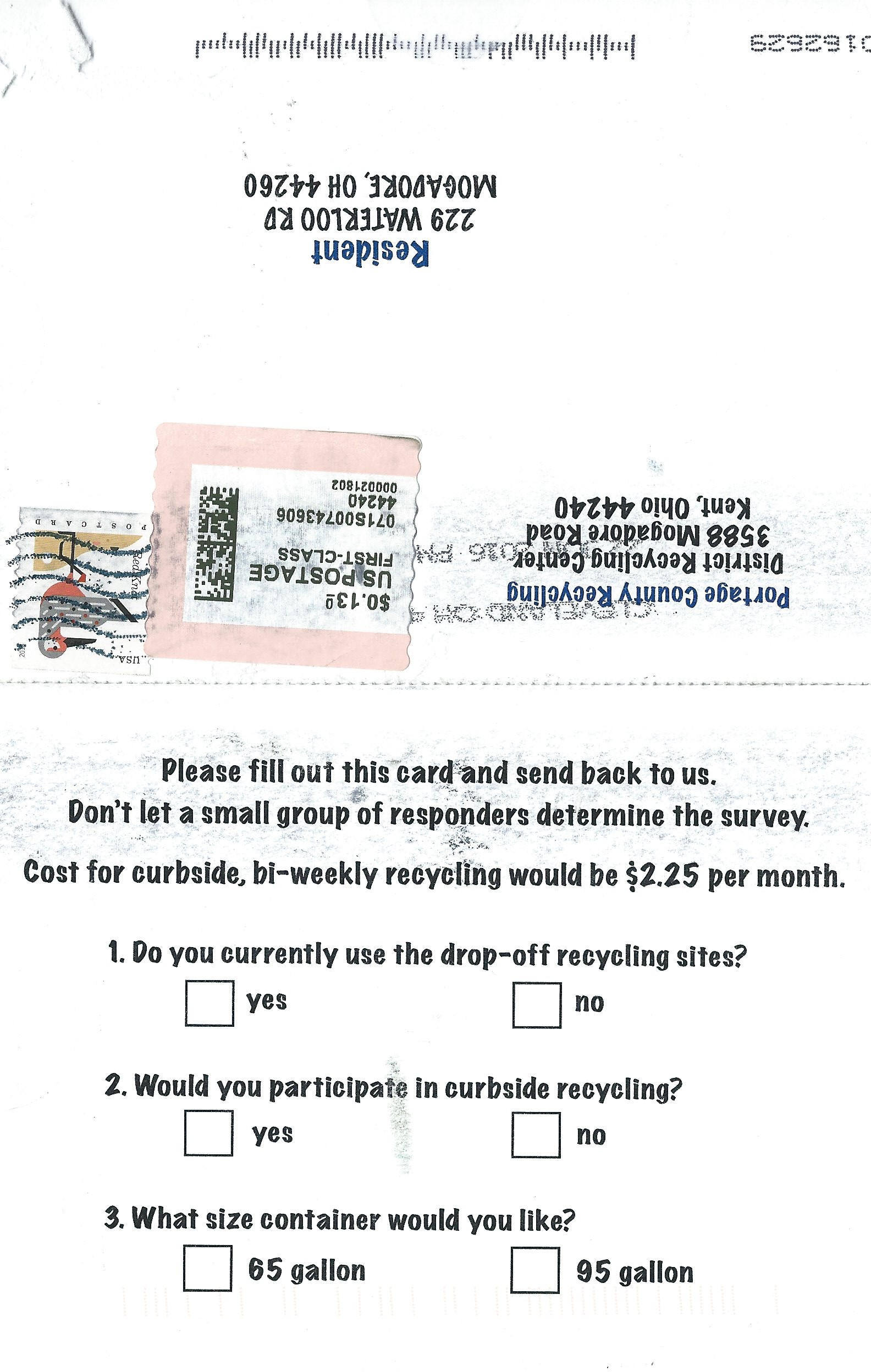 Trustee Jeff Eldreth mentioned that the Portage County Solid Waste Management had sent out mailings on the recyle issue to all Suffield residences.  Included was a card (see photo on the left) that allowed the resident to "vote" on whether they would like to go to curbside recycling or keep things as they are now.  If you have not received a card, contact Dawn McIntyre at: This email address is being protected from spambots. You need JavaScript enabled to view it. .  Eldreth mentioned that in Rootstown, a similar poll was conducted and about 1,200 of the 8,000 residents responded.  In Suffield there are about 6,311 residents, who live in about 2,400 residences.  The cards will be counted at the Portage County Solid Waste Management facility in Brimfield and Eldreth said that he would be there watching the count.  No date has been set for calculating the results.  Trustee Dave Vartenuk suggested that a public hearing on the matter would likely be needed before the trustees made a final decision.  It should be noted that there are plenty of questions that need to be answered.

In other matters, three residences will be getting a visit from the Zoning Inspector Adam Bey in the very near future.  The houses at 1535 Whitehall Drive, 1560 Carriage House Drive and 1470 North Polen Avenue have yards in which the grass has been left unattended for the entire year.  Initally, these houses will receive a written notice to mow the lawn within  seven days, or the township have it mowed at the owners expense.  The trustees established a minimum cost of $500 per mowing.  This was not the first time that the house on Carriage House Drive has been mentioned.  For several years the neighbors have complained about it.  Construction of the house began in the middle 1990's and soon thereafter stalled.  Over the years the neighbors have had to look at an unfinished house and a lawn that was typically mowed once a year.  Two years ago, the township began the arduous process of condemning the property and attempting to have the house demolished, but various court actions by the original owner, and now the bank that foreclosed on the property, have slowed the process.  The house on North Polen Avenue likewise has been an eyesore several times over the past years.  One of the problems there is determining the owners name and address.

Fire Chief Robert Rasnick attended the trustees meetings.  He asked that the trustees allow appointment of Christopher Dinkins as a new firefighter.  Dinkins has previously been a Suffield Fire Department employee in 2013 & 2014, but had to give up his position here when he hired on as a full-time fireman in Akron.  Rules there prohibited him from working part-time elsewhere during his probationary period, which is now over.  He will work here as a probationary employee for his first year.  The Chief also asked the trustees for up to $6,800 to buy a new "Jaws of Life" hydraulic metal cutter".  This new cutter will exert up to 200,000 pounds of pressure when cutting metals.  Previously, Chief Rasnick had learned at a conference in Indianapolis that the newer cars have metal framework that our current "Jaws of Life" devices will not cut.

The water level of Wingfoot Lake was discussed and it was decided that trustee Eldreth would attempt to learn the actual water level.  The old Trellborg property came up again and court documents were presented by Trustee Chairman Tom Calcei that show the State of Ohio Attorney General's Enviromental Enforcement Section has begun litigation against the owner of the property, Howard J. Trickett. 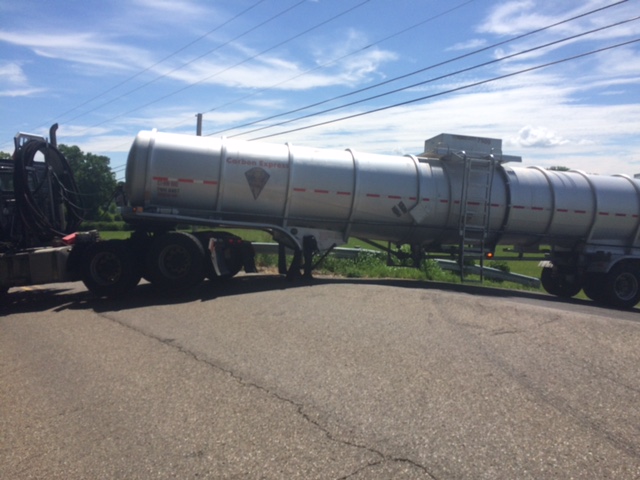 The trustees will meet again on July 12th at 7:00 PM for a 2017 budget hearing, followed at 8:00 PM for the regular trustees session.  On Thursday July 7th at 8:00 PM, the Board of Zoning Appeals will hear from Gary R. McFarland of 1738 Meander Way about an accessory building that he'd like to build, but his plans call for it to be closer to the lot line and 28 square feet larger than zoning rules allow.  The Zoning Commission also meets, but not on its usual time.  The have moved the meeting to Wednesday July 20th at 7:00 PM.